Comparison of iPad Mini vs Nexus 7

If you still haven’t purchased a tablet then by doing a quick research on the internet you will find several devices to choose from. The most popular choices around the world are the iPad Mini and the Nexus 7 tablets, but what is the best tablet for you?

The first thing we need to compare is the price and the display for both of these tablets. If you do not want to spend a lot of money for a tablet, then Nexus 7 will definitely be your choice. Nexus 7 starts from $199 and goes up to $299, but in the other hand iPad Mini starts from $329 and goes up to $599. The difference is very big, but we will see if the difference of the price has to do with their performance.

The diplay of both devices is very good, but Nexus seems to have a lead there as well. Nexus has a 7-inch 1280×800 display and iPad Mini has a 7.9-inch 1024×768 display. iPad Mini is better for web-browsing than Nexus 7, but some people do not like that they cannot hold it with one hand (!).

The dimensions for both devices are very close to eachother. iPad Mini has the same weight as Nexus 7, but iPad Mini is much thinner (but wider and longer). Nexus 7 does not have any hardware buttons and sometimes might trick you to wonder which side is front or back, unlike iPad Mini. iPad mini has glass and aluminium construction which makes it more appealing to people.

Bettery life is one major factor you should take into consideration before purchasing a tablet. Although they have almost similar batteries iPad Mini has a bigger bettery life than Nexus 7, so if you need to have it more time without charging it iPad Mini will be your choice.

Do you have any experience for both of those devices? Please share them with us! 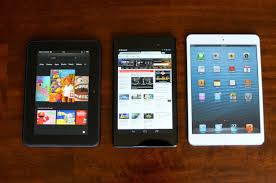