The History of iPhone!

The man behind the idea of iPhone is very well known to everyone, and he is Steve Jobs. This is the time when Steve Jobs created the Apple company and made researches and investigations of touchscreens and tablet computers. In 2003 Steve Jobs believed that tablet PCs and PDAs was not a good market for Apple to join, but he strongly believed that cell phones will become very important devices in the next years (And he believed correctly!). During that time, Apple was very busy with the creation of their iPod and iTunes, but when they released iTunes the Motorola company created a cell phone that could use Apple’s iTunes. Steve Jobs was not happy about it and a newer iTunes version was released that included references to a mobile phone that could display pictures and video.

This is when Apple tried and succeeded in creating the very first iPhone (2007) which was a great inovation to the mobile market.

When the next iPhone was released?

After one year, in 2010, Apple released the iPhone 4 and with this device they showed how powerful a smartphone can become.

iPhone 4S and iPhone 5 history – When the next iPhone will be released?

iPhone 4S and iPhone 5 models (2011 and 2012 release dates) are still among the best smartphones in the current smartphone market. They have very powerful characteristics and iPhone 4S can still compete the majority of the todays smartphones.

Apple will constantly try to make their smartphones better and better, this is why they are already planning their next iPhone (iPhone 6 or iPhone 5S?). All their new releases have bigger screens, less weight and more powerful hardware.

Do you have any thoughts about the new iPhone? What do you expect from Apple? Please share your thoughts! 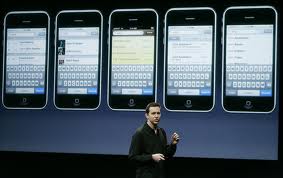