Apple released just a few hours ago their latest iOS version and all iDevices that support the iOS 7 version, can install iOS 7.1.1 version without any restrictions. This update contains some improvements, some bug fixes and a few security updates.

These are the most important updates you will get if you Install iOS 7.1.1 version.

In which iDevices you can Install iOS 7.1.1 version?

There are two methods that you can update your iDevice to iOS 7.1.1 version, but first you must be sure that your iDevice supports it.

The two method you can Install iOS 7.1.1 version are via iTunes and Over The Air (OTA). Each method has its advantages and disadvantages, but the final outcome is the same. 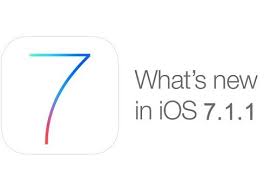 I personally use the iTunes method, because it never gave me any trouble. On the other hand, the OTA method gave me some issues, and I had to re-do the whole process from scratch. Generally, both methods are trustworthy, so you can choose freely whichever you want!

If you encounter some freeze issues with 7.1.1 iOS version do not worry, because they can be fixed!

[…] You will also find interesting the following article which explain you how to install 7.1.1 iOS version through iTunes! […]